Find all the outfit details for each member of this year's class in part 1 of this official Star Guardian cosplay guide!

The Star Guardians are protectors chosen by the First Star to safeguard the light in the universe. Accepting the First Star's call to protect the world can be daunting, but getting to wear the most beautiful outfits in the literal universe is a pretty nice perk. If you're inspired to cosplay as one of this year's new class of Star Guardians, this guide is for you!

This guide is the first of a two-part series. Keep an eye out for the Star Guardian Cosplay Guide: Part 2!

The Star Guardian look involves lots of exaggerated shapes, luminous layers, puffy ribbons, wispy feathers, and floaty petals. Everything is bright, colorful, and ✨magical✨. Each Guardian also has their own unique style, gem, and familiar. Unless noted otherwise, every uniform's white bodice and gloves are iridescent (but not shiny) white material, like sateen. Boots are typically pearlescent white pleather. Some pieces, such as the inner layers of skirts, are simple but sturdy white cotton. Other key finishes and fabrics include satin, chiffon, sparkles, spandex, and—oh, did we mention sparkles? 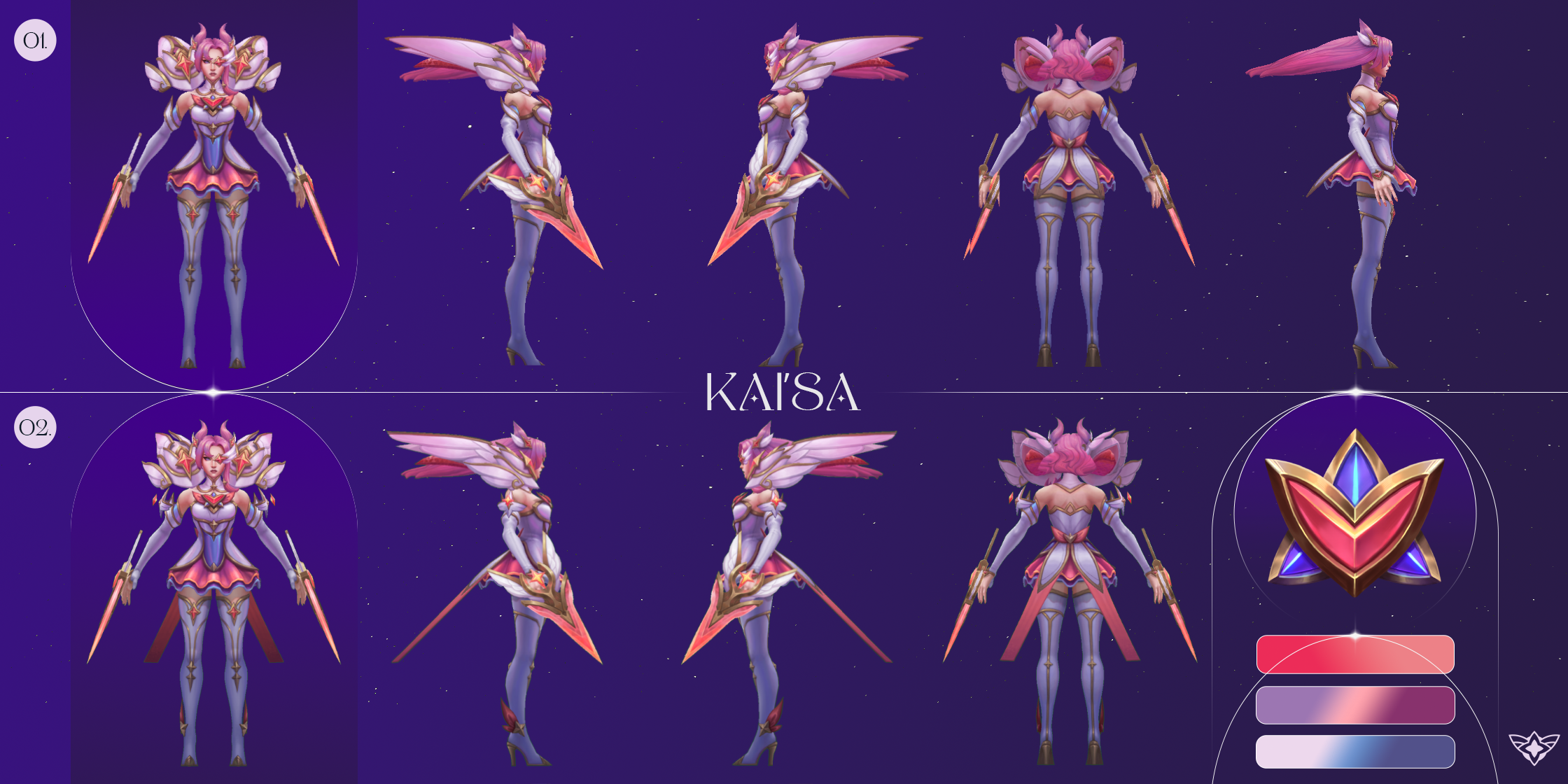 Star Guardian Kai'Sa's outfit is mostly a strawberry pink color. Her skirt is an iridescent, satin-y pink material with outer piping, and the bow on her chest and her lower back are made of the same fabric. The blue panel accents on her stomach, top of her sleeves, and rear bodice flares are semi-rigid, holographic plating.

Compared to her(1) Base Form, the feather-shaped armor plating on her Jets in her (2) Evolved Form are much more pronounced. She also gains additional crests on her gloves and boots, and the white ribbon on her back extends and transforms into translucent pink organza. Her (3) Homeguard Jets speed her up when she needs to jump right back into combat. Speaking of, her (4) Energy Blades light up while she is Supercharging, and her (5) Energy Reader gauges the power levels of those around her. Oh, and don't be fooled by the cute bunny with the cape—that's her very protective familiar, Ina. You don't want to mess with Ina. 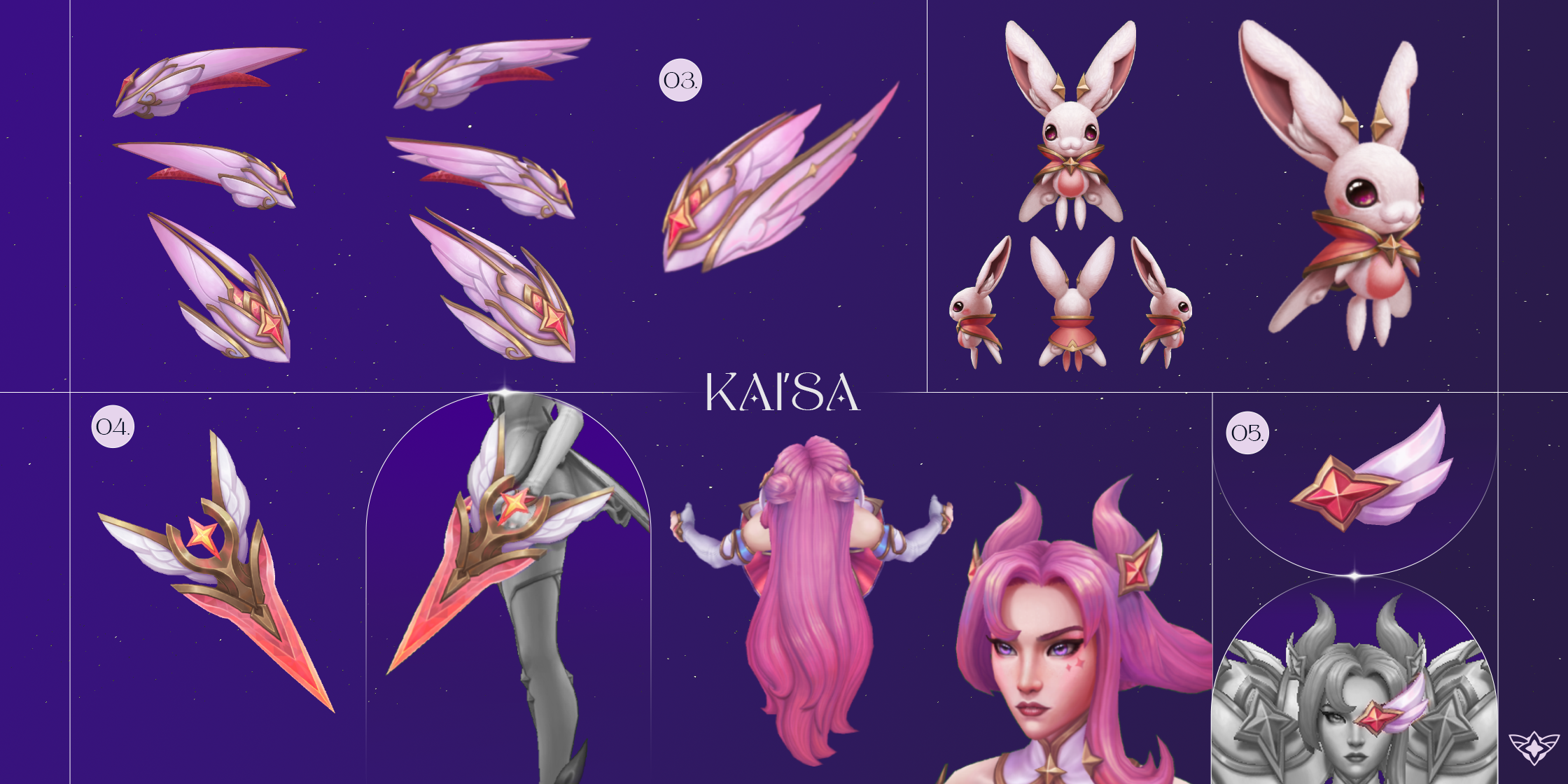 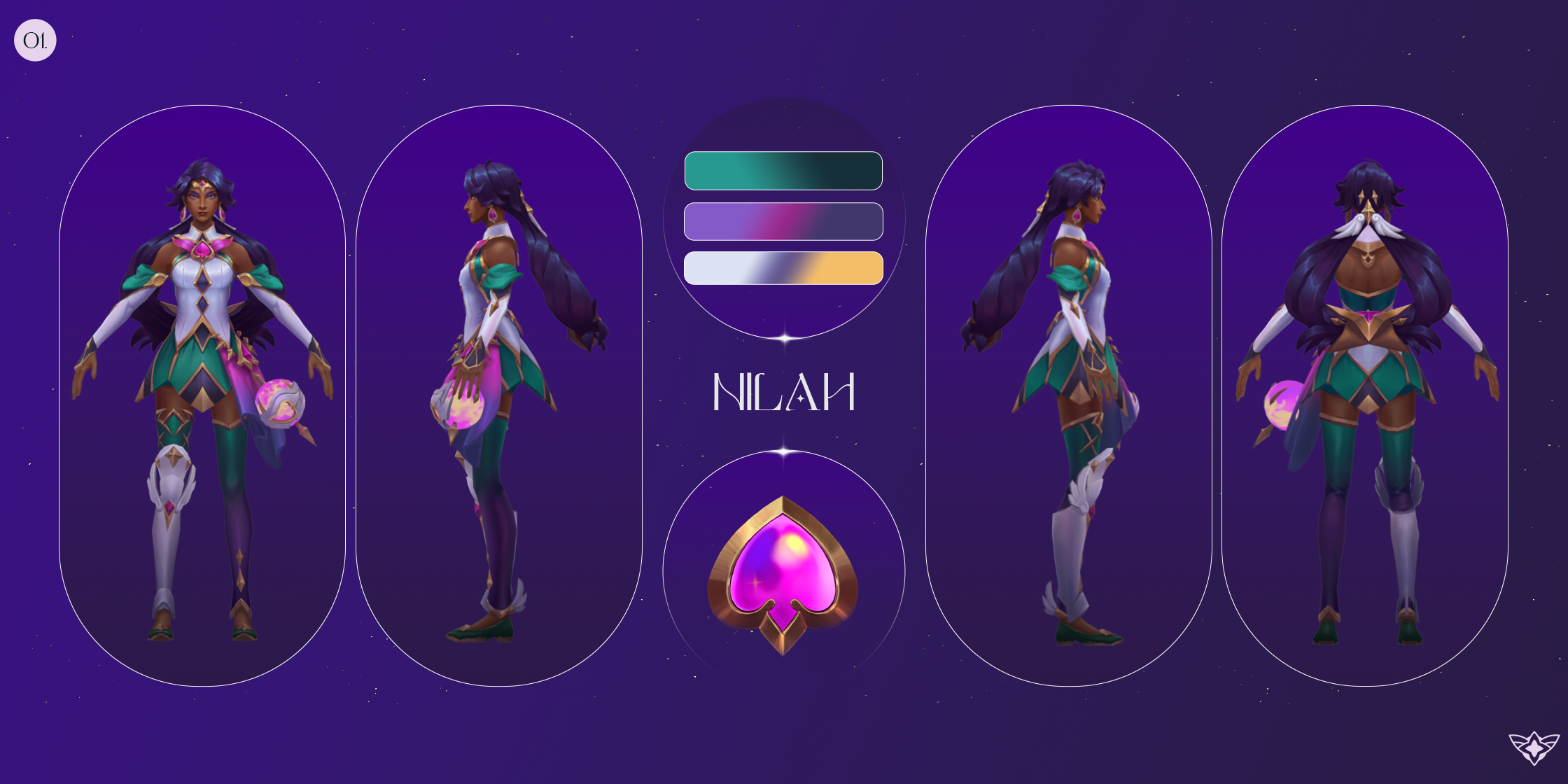 Star Guardian Nilah's outfit has three main colors: magenta, deep teal, and purple. Her stockings are a duochrome fabric, and her (1) Shin Armor is made of structured pleather. She wears dark teal suede flats, and her skirt is made of structured satin panels of the same color. Her (2) Urumi, which redirects the energy of the demon in her (3) Liquid Sphere, shares the same joyous magenta and yellow colors as her familiar, Dahlia. She also wears a gold and magenta (4) Diadem and a purple silk scarf at her waist. 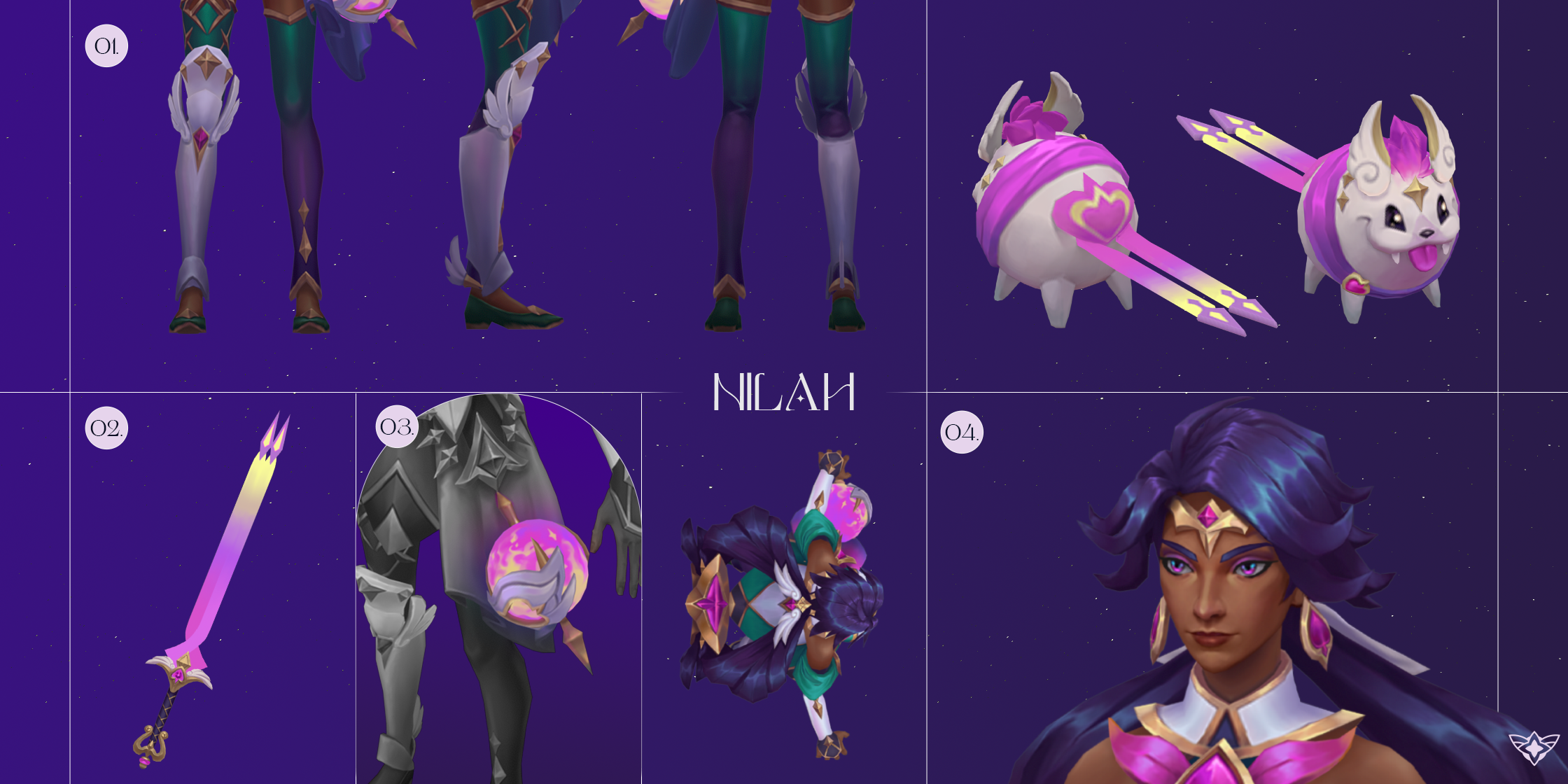 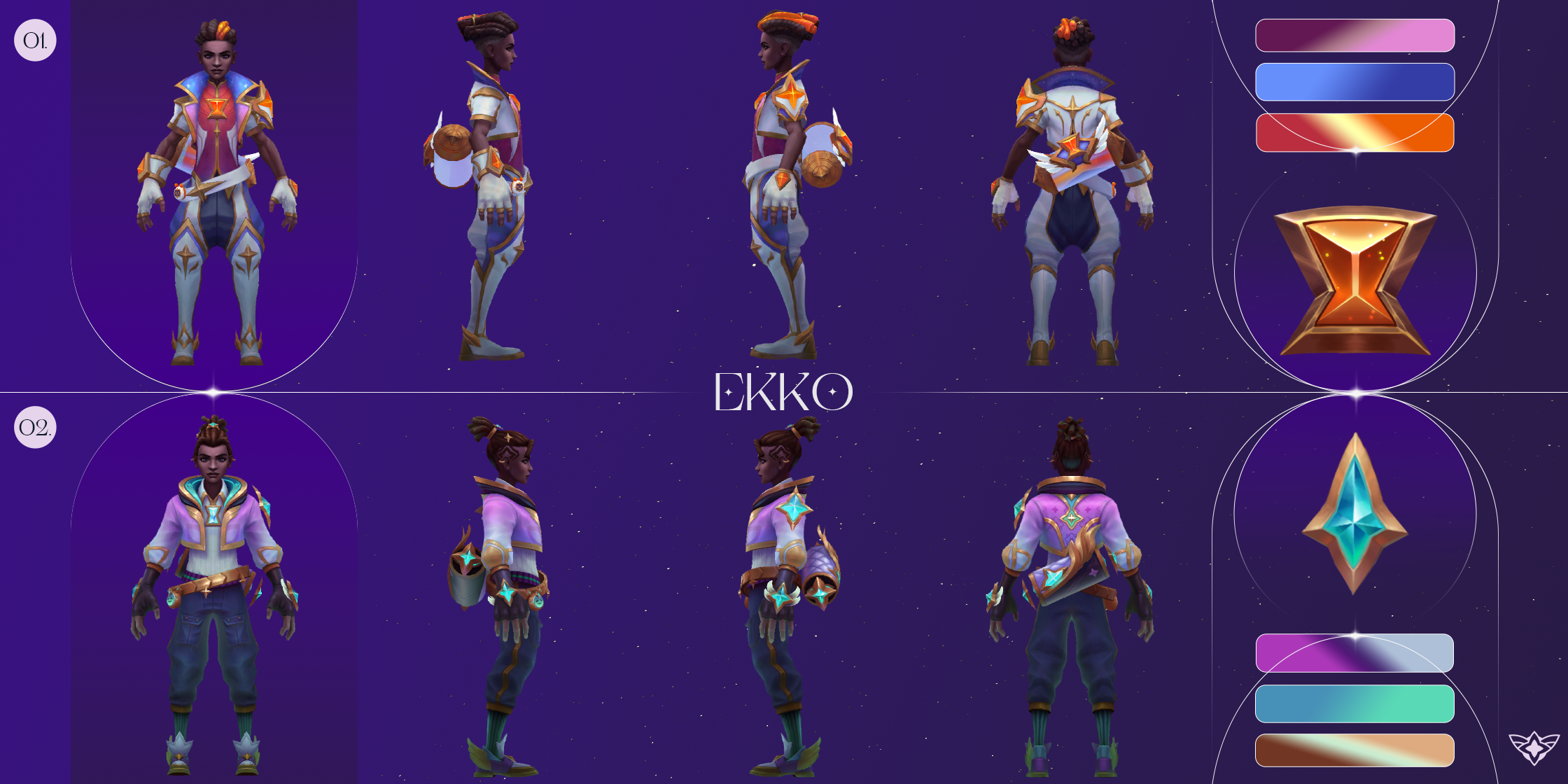 Star Guardian Ekko's primary color in (1) Base Form is orange. The inside of his collar is a galaxy-patterned satin, and his pants are made of a crinkly athletic material, perfect for jumping back in time. In his turquoise and purple (2) Prestige Form, he wears a sturdier rounded collar, lamé jacket, ribbed shirt and socks, dark cargo pants, and brand new kicks. His (3) Belt also transforms from white pleather to gold metallic material. He always carries a (4) Book with him which shows up during his recall animation. His weapons include a (5) Temporal Device and his (6) Sword. Despite being a first-year, he's already made a name for himself as a technological genius, especially when he built his familiar Waku. 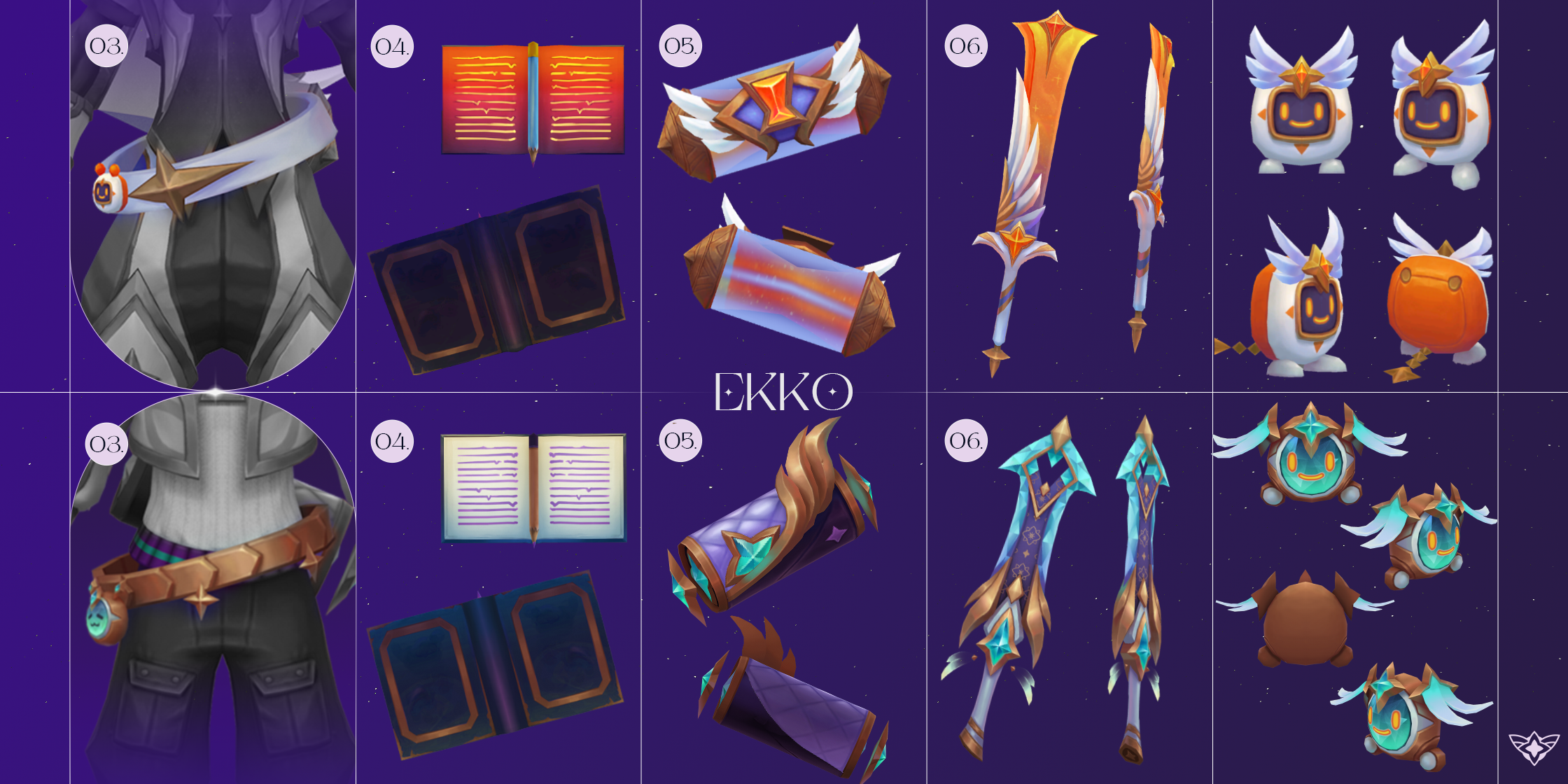 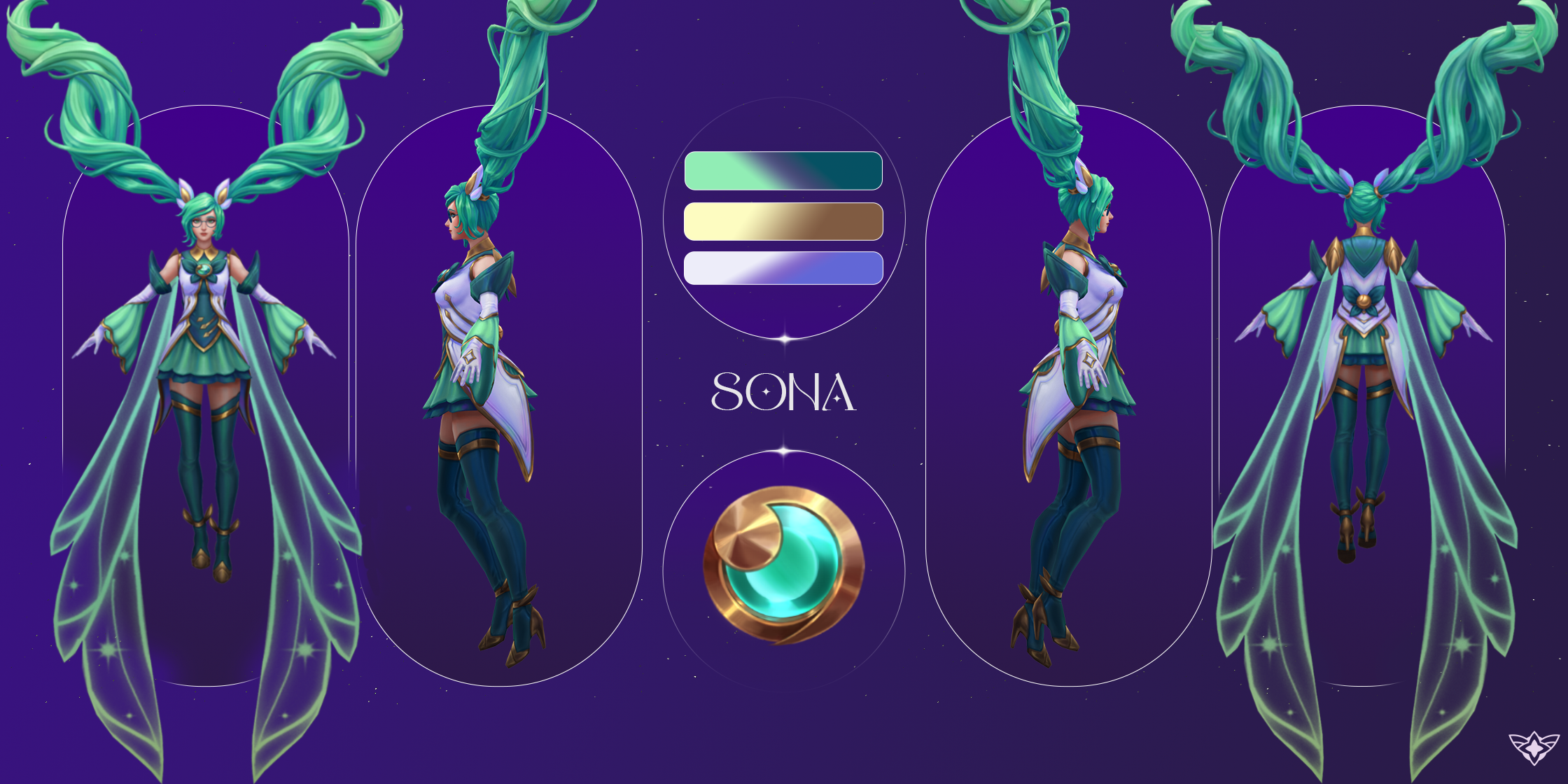 Star Guardian Sona's color is aquamarine. She and her familiar, Chiizu, both love to read and wear matching large metal frame (1) Glasses. Her flowy skirt and sleeves are made of green chiffon, and her dark green stockings are similar to spandex. Her (2) Wings are very delicate and sheer, like laser gauze. She's especially known for her courage and talent for the 3) Etwahl. 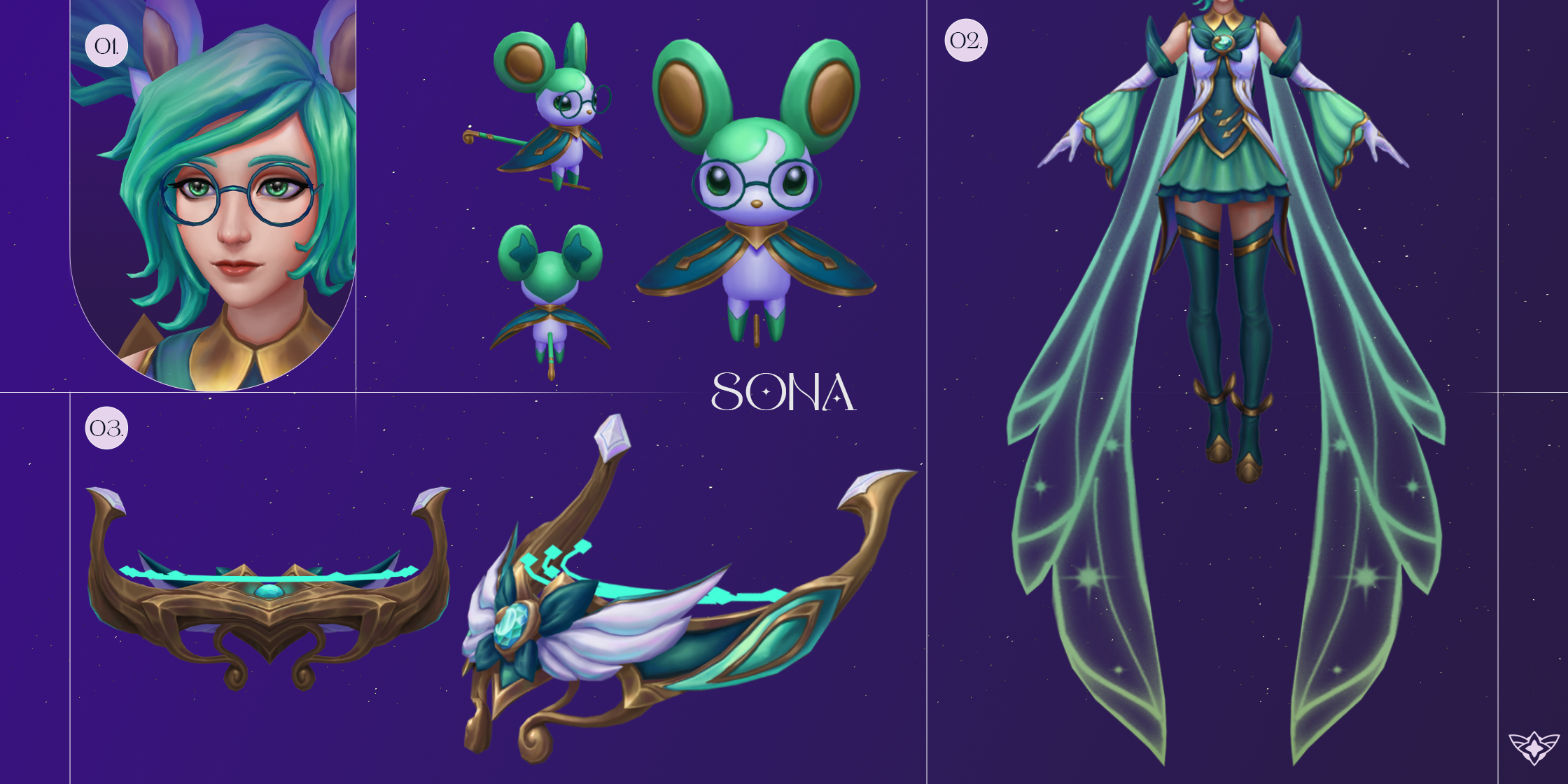 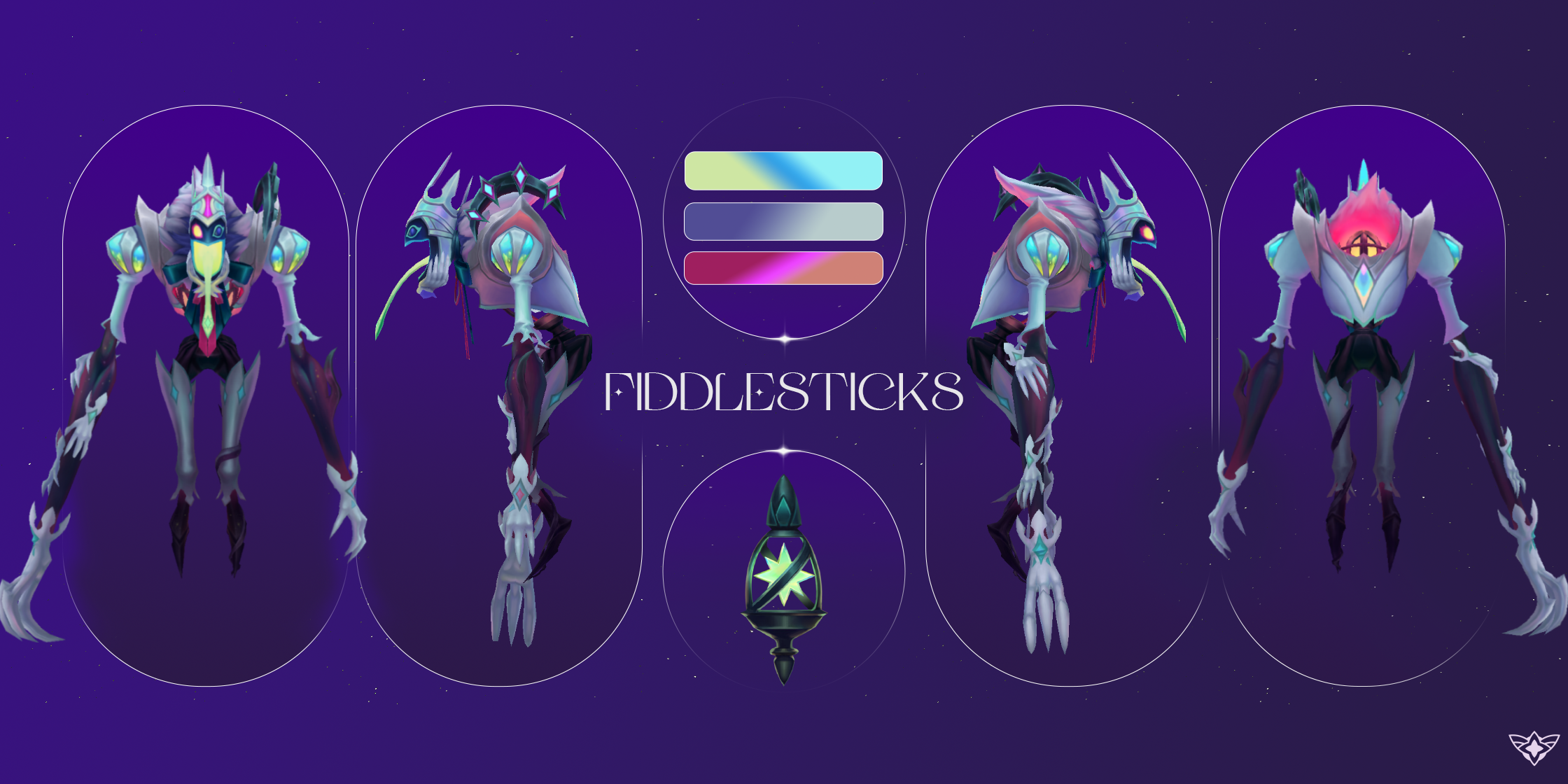 Star Nemesis Fiddlesticks doesn't really have a main color, or main… anything, really. It appears to be a hobbled-together mix of white, pink, teal, and green (1) Ties and (2) Gloves from other Star Guardians and—wait, are those chess pieces? You can also see a glimmer of hope faintly shining inside its (3) Lantern, and it wields an uncharacteristically bright, magical (4) Scythe. Its familiar, Geist, seems to be trapped deep within its core. Hmm... 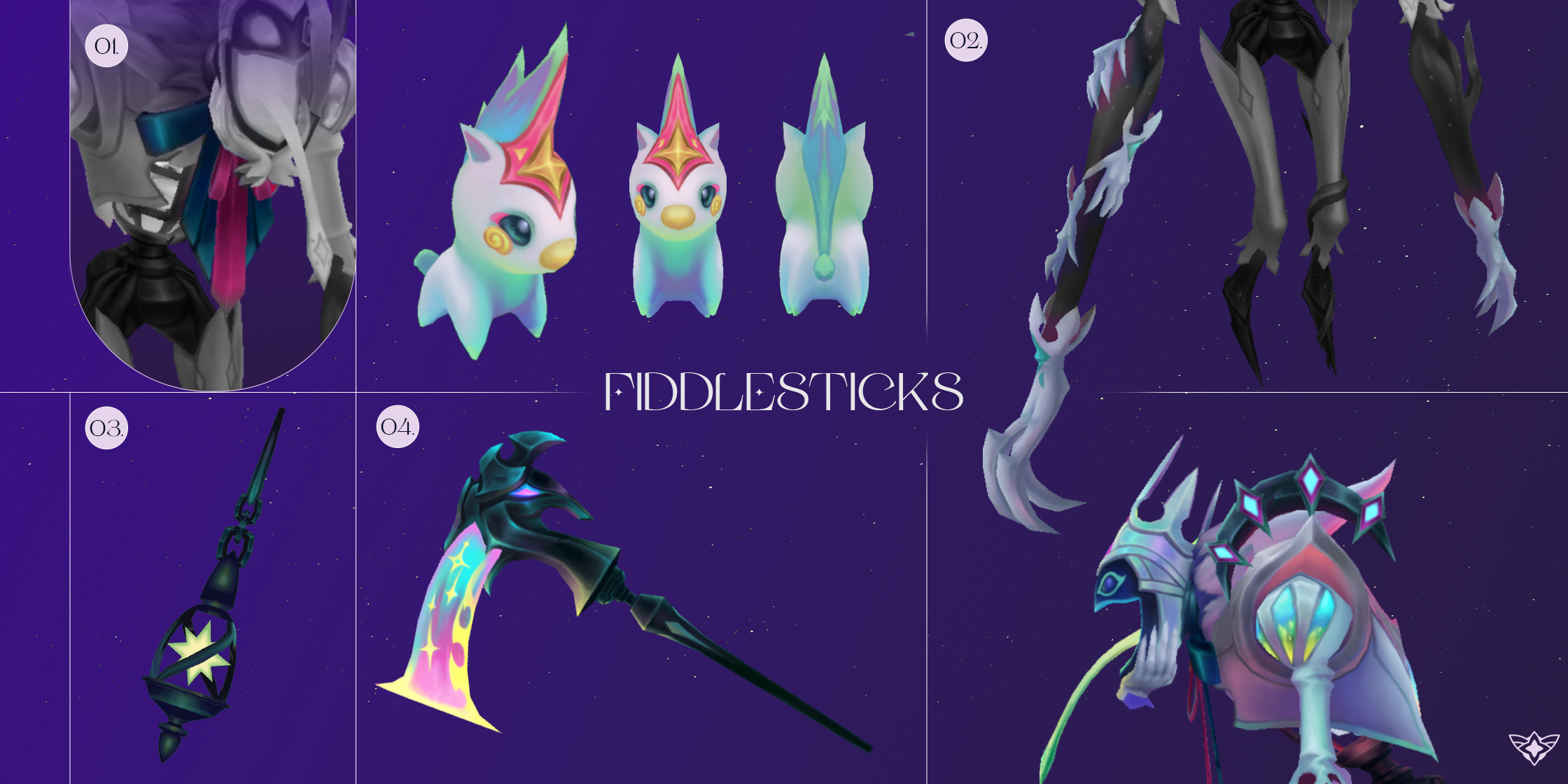